1st Oct 2021 Data are cultural: what does that mean for understanding well-being? 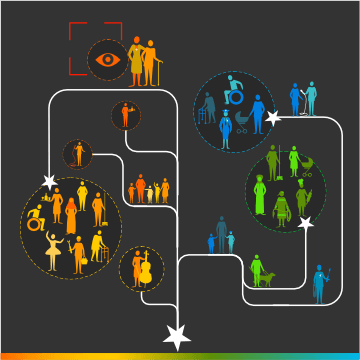 This article was first commissioned and published by ArtsProfessional

For thousands of years, philosophers have asked: ‘What makes for the good society?’, or indeed ‘the good life?’ Susan Oman revisits these questions, asking how data help us understand – differently?

Ideas of culture have been fundamental to thinking about well-being; how we experience it and what it even is: whether personal well-being, societal well-being, happiness, contemplation, or feelings of empathy and connection with others. Yet, I start lectures to future cultural managers, producers, educators and researchers with the provocation: “The arts are good for us – really? Why? Just you? Or everyone?”

Understanding why we believe in a relationship between culture and well-being helps solve the puzzle of why we feel we must argue it – and the role of data in these dynamics. Notions of culture, whether that means how we live together, experience the arts, or creative industries and what we call the cultural sector, are all included in opinions on this relationship as a positive one.

The relationship has a long intellectual history and has become part of ‘common sense’, which is why we feel it, but why the burden of proof? When David Cameron introduced the measuring national well-being programme in a Prime Ministerial speech in 2010, he argued that we already know what matters to people for their well-being – that these are “instincts we feel to the core”, but that “it’s right that as far as possible we put them to the practical test”. In other words, he was saying that we should collect more data about well-being to prove what we feel and think it is.

Tracking the relationship between what people feel and what they do

Some well-being data are designed help us understand how we feel, too. Questions which generate these kinds of data were introduced in the UK (and beyond) in the few years following Cameron’s statement. These weren’t really new – as such, more of a re-launch of long-standing questions at a larger scale. Questions on subjective well-being (or personal well-being in the UK’s measures) now appear in most UK national-level surveys administered by the ONS, and many beyond (including DCMS’ Taking Part survey of cultural participation).

This means data on how anxious and happy people are, together with how satisfied with, and worthwhile they think their lives are, are appearing in surveys that collect data on how often people go to museums, people’s opinions on climate change, eating habits and migration. This means researchers can uses these data to study relationships between how people feel in themselves, and what they do, and what they believe, at scale.

Well-being data collection dates back thousands of years, to the Roman census and beyond, and has evolved over time, reflecting political interests and intellectual and technological developments. The word ‘statistics’ was coined in the 18th century to describe a new system of accounting for Scotland to measure ‘the quantum of happiness’ in a population.

‘Statistics’ emerged from a statistical philosophy around the time that Kant was developing a philosophy of aesthetics. In other words, if you look at ideas about data and their use in measuring well-being, and ideas of culture and its relation to well-being, they are historically interlinked.

As you continue to move through history, institutions founded to manage data emerged at the same time and in similar ways as those which were established to manage culture – both in the name of well-being. This is not something we often think about. The pairings of data and well-being, and culture and well-being have both become more common sense, and yet data can often feel alien for those working in cultural sector.

When I interviewed different people working with data across the cultural sector back in 2018, people often considered themselves strange for ‘getting both’, or felt anxious about the increasing pressure on arts organisations to be ‘datafied’ or ‘data-driven’. There is a feeling that there is somehow an inherent divide between art and data, or that creative people can’t do data. This feeling has also been with us decades and is not true, there are many good data people in the arts.

This is an unproductive and false dichotomy, and something my book discusses with a view to resolving it through more honesty, transparency and better communication. We should be more understanding of how people feel about data so that data help us arrive at a better shared understanding. At present, data practices in the sector, if anxiety-producing, are bad for well-being in our everyday lives. Arguably, this is not what data – or culture – should be for.

The sector is often called on to collect more data to prove what we feel: if only we had better data we could argue this or that. At other times these calls can feel as if data alone will solve questions of inequitable funding, access and the other structural inequalities that the sector has faced for a long time.

This is a misleading, if not a wilfully distracting process. Data are powerful, but they can’t solve racism for us: structural racism needs to be addressed by people, not data. I have also heard research participants describe being ‘armed with data’ to make positive change. This doesn’t deny the persuasiveness of data – but data tend to support the work being done to make change by advocates, they do not change these things in and of themselves. This misunderstanding of what data can do needs demystifying. Data are cultural. They are not the neutral descriptions of a reality that can necessarily prove what is implied.

While data on how people feel from large-scale survey samples might seem perfect for the cultural sector to argue its contribution to well-being, there are limitations. Finding correlations between how many times people go to a museum a year and how happy they were yesterday (when they were asked six months ago, perhaps, we don’t know) doesn’t satisfy the burden of proof. It also does nothing to help us understand the relationship between culture and well-being, really. Perhaps generally happier people tend to visit museums more?

Using well-being as the defining characteristic of cultural activity is both useful and a pitfall. Both concepts are often ill-defined, and since culture can one-minute mean something everyday, and the next minute mean the funded arts, arts activities can claim impact that actually belongs to cultural activity outside the funded arts. Crucially, whatever it is that is being done with data is not satisfying calls to prove the relationship anyway, so why keep relying on them in the same ways?

We must do data better

With well-being, which can also mean health, or happiness or empathy, or social cohesion, it is a very complicated concept. Using data to measure simply described ideas might enable good headlines for media stories, but it doesn’t help us understand the culture – well-being relationship any better – or indeed the role of data in understanding it.

What can be measured and what should be funded are two questions that can only have subjective answers. To believe that the former exercise can neutrally answer the latter is a distraction, and leads to poor uses of data. Instead, the answers lie in returning to the questions that precede the data, not believing that the data are the answer.

Data are instead a cultural product with their own intellectual and institutional histories. With this in mind, we must understand how to do data and well-being better, and make for better culture: be that working cultures, inclusive spaces and ideas or a better society.

Dr Susan Oman is a Lecturer in Data, AI and Society at The University of Sheffield
Twitter @Suoman

Illustration by eyedea studio for ‘Living With Data’

This website uses cookies to improve your experience while you navigate through the website. Out of these, the cookies that are categorized as necessary are stored on your browser as they are essential for the working of basic functionalities of the website. We also use third-party cookies that help us analyze and understand how you use this website. These cookies will be stored in your browser only with your consent. You also have the option to opt-out of these cookies. But opting out of some of these cookies may affect your browsing experience.
Necessary Always Enabled
Necessary cookies are absolutely essential for the website to function properly. These cookies ensure basic functionalities and security features of the website, anonymously.
Functional
Functional cookies help to perform certain functionalities like sharing the content of the website on social media platforms, collect feedbacks, and other third-party features.
Performance
Performance cookies are used to understand and analyze the key performance indexes of the website which helps in delivering a better user experience for the visitors.
Analytics
Analytical cookies are used to understand how visitors interact with the website. These cookies help provide information on metrics the number of visitors, bounce rate, traffic source, etc.
Others
Other uncategorized cookies are those that are being analyzed and have not been classified into a category as yet.
SAVE & ACCEPT
Powered by